LAKEHURST – Despite 92-degree weather, residents, public officials and borough officers came out for a “Blue Rally” to show support for the members of the police department.

A nationwide campaign circulated through social media calling for residents to demonstrate support for the law enforcement agencies in their communities last week and resident Jennifer Pfeifer took up the challenge to do just that.

With the help of friends and with full cooperation of the mayor and council she was able to quickly mobilize around 20 borough residents for a 2 p.m. march from the Union Avenue parking lot to police headquarters.

The participants carried signs and in some cases wore blue police shirts to show their support.

Mayor Harry Robbins and his wife Eileen came out on the very hot day of July 18 for the event sporting Lakehurst police shirts.

“This is to support our men and women in blue. Not just ours but all through the country. Right now, police are getting a bad rap. Like in anything, any religion, race or profession there is good and there is bad. To say one person is bad and then to say the whole group is bad is hypocritical,” the mayor said.

“There is always bad cops and there is bad in everything but to say they are all bad because of a certain group isn’t right,” Mayor Robbins said, adding that police across the country were currently being painted with a broad brush stemming from acts of police brutality and racism that have occurred and which have garnered global attention.

His wife echoed his sentiments. “In any profession you are going to find good and bad. A bad apple doesn’t describe them all. I wouldn’t want to be a police officer these days. You put your life on the line just walking out the door.”

“You can’t even do your own job,” Mayor Robbins interjected.

“There are too many cameras and when you see people fighting, instead of stopping it, people video it,” Eileen Robbins added.

Police Chief Matthew Kline said he was very pleased with the turnout and the show of support for his department and others in his profession. Kline was sworn in as chief in January but has served in the department for years.

“As a police chief this is overwhelming. The support that this community gives us is great and I couldn’t ask for more. When the community and police department work together it is great,” the chief said.

Among the changes Kline implemented were a change in uniforms and the recent hire of two new officers. William R. Bowers and Harry J. Paul were sworn in on July 16 during a Lakehurst Council meeting.

“We have another temporary officer so we increased our manpower. We changed our record management system. We changed the way we were ticketing. There is less citations and our officers now focus more on their surroundings,” the chief said.

The department has nine full time officers of its 13-member force. The department was also “accredited back in October of 2019 and we are continuing on with the accreditation process,” Chief Kline said.

Police accreditation by a state agency means the department has met the highest standards and practices of law enforcement.

The event’s organizer said, “I think people are failing to realize that these people who are rallying against the police officers are forgetting when they are in need or get into a car accident or someone breaks into their home or whatever it is, these are the people they are calling and if that isn’t there what will happen?”

Pfiefer added, “Everything would just fall apart so I think it is really important to support them especially our Lakehurst police officers. They are great; they are there, and care, and are here today.”

“It is unfortunate that an incident happens and it is like all the police officers are like that.”

“It all started with one incident. My 7-year-old daughter was asking me this morning and she had seen what had happened with the officers (involved in the George Floyd case in Minnesota). We watch the news, and she said police are bad they hurt that guy but I told her just because one person did something bad doesn’t mean they are all that way,” Pfiefer said.

“If we don’t have the police who do you call? They now have to be afraid that if they have to come out and have to deal with someone combative and they have to hurt them they may end up losing their job and that is wrong. It really is,” she said.

She added on social media that for those disappointed that they missed the rally, “you can always put a sign on your window, front lawn etc. saying “back the blue.” Let our officers know Lakehurst supports them and respects what they do every day.”

Chief Kline joined several of his officers, the mayor and the blue rally participants for a group photo in front of their police headquarters sign and had some cold drinks ready for the rally walkers to drink upon their arrival. 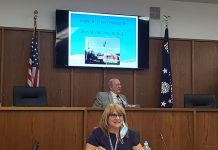