LAKEHURST – A Browns Mills man was arrested after fleeing from officers after a traffic stop.

Tyquan O. Warthen, 22, was charged with obstructing the administration of law and resisting arrest by flight.

Officer Robert Schroeck stopped a 2008 Chevrolet with two unilluminated rear brake lamps and tinted windows around 11:41 p.m. Jan. 22 at Route 37 and Brown Avenue. There were two occupants in the vehicle.

Schroeck, believing he had probable cause, searched the vehicle and found an open container of alcohol. He also questioned the name and birth date of the front seat passenger, who then fled on foot.

Schroeck, joined by Officer Harry Paul, quickly apprehended that man, who had provided a fictitious name. The man, Warthen, told police he fled because he thought he had warrants out for his arrest. Lakehurst Police confirmed he did not.

Warthen was processed at Lakehurst Police Headquarters and transported to Ocean County Jail where he was lodged pending a mandatory court appearance in Ocean County Superior Court.

The driver, whose name was not provided by police, was issued three motor vehicle summonses for maintenance of lamps, obstruction of view and possession of an open container of alcohol in a motor vehicle. 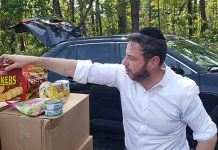