OCEAN COUNTY – Three people were arrested in connection with a cocaine and heroin distribution ring out of a Manchester Township home and two vehicles.

Darnell Williams, 35, and Nyesa Richardson, 33, both of Manchester, were both charged with multiple heroin and cocaine distribution and possession offenses. Both are being held in Ocean County Jail pending detention hearings.

Daniel Crudup, 61, of Brick, was also charged with heroin and cocaine possession and distribution offenses. He was released on a summons pending a court date.

Authorities stopped a vehicle at Route 571 and 70 Monday. At the same time, a no-knock warrant was executed at a Manchester home. The motor vehicle stop and home search yielded 260 grams of cocaine, 400 individual doses of heroin, 20 grams of crack cocaine, and $5,400 in cash. 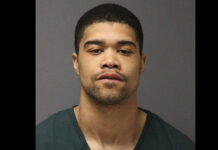