MANCHESTER – Driver error and inexperience are believed to be the cause of a crash that sent three people to the hospital, flipped a vehicle, and damaged a utility pole.

The collision took place in the Pine Lake Park section of town near the intersection of Commonwealth Boulevard and Bismarck Street just before 5 p.m. on July 8, police said.

Investigators believe a 2010 Lincoln MKZ was travelling south on Bismarck Street. The driver, a 17-year-old township resident, did not stop at a stop sign.

This caused his Lincoln to collide with the passenger side of a 2017 Nissan Sentra, which was traveling west on Commonwealth Boulevard. This caused the Nissan to roll at least three times, coming to rest on its driver side on Bismarck Street, approximately 200 feet from impact. While literally rolling down the street, it took out a speed limit sign and launched it through the windshield of a parked, unoccupied 2015 Toyota Corolla.

The driver of the Sentra was Jocelyn Isaza, 42, of Toms River. She sustained a concussion and fractured hands and fingers.

The Lincoln crossed the intersection and struck a utility pole and came to rest on a lawn. The driver and his 17-year-old passenger sustained abrasions and lacerations to their faces and arms.

All parties were determined to be wearing their seatbelts and were subsequently transported to Jersey Shore University Medical Center via ambulance.

Assisting at the scene were members of the Ridgeway and Manchester Volunteer Fire Departments as well as EMTs from the Manchester Township Division of Emergency Services. Also assisting were representatives from Jersey Center Power & Light, and Priced Rite Towing.

The roadway was closed for several hours during the investigation and cleanup. The investigation is still ongoing, but police said driver error and inexperience appear to be the primary cause of the crash. This crash is being investigated by Patrolman Jesse Hoydis of the department’s Traffic Safety Unit. 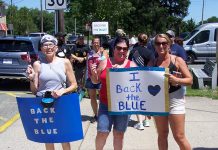