HOWELL – Howell’s homeless encampment held an open house for those looking to see what Destiny’s Bridge is all about. Individuals could show up for a meet and greet and get a tour of the camp, located at 5998 Route 9 in Howell Township.

What Destiny’s Bridge does, according to camp leader Minister Steve Brigham, is provide “all the basic necessities” for those who might not necessarily have access to them. Services such as housing, food, and company can be provided by the community at the encampment.

Currently, the camp hosts 12 individuals. Brigham noted that, as the land they reside on is owned by Howell Township, the township has imposed a cap of 15 people allowed to live on the land. So, they have an intake process.

The encampment houses tents that are 14 x 10 feet, and 7 feet tall. These are covered in a sort of plastic encasement that helps to hold in the heat, similar to that of a greenhouse, said Brigham. The camp is also outfitted with various propane heaters, called Buddy Heaters, that provide a heat source for the residents and are equipped with safety measures such as automatic shut-down when overturned.

While only 15 individuals max are allowed to reside on the property, the camp welcomes people from all over to stop by for a meal or some warmth. Brigham explained that there are other homeless individuals not living with the encampment, who are sleeping in Walmart parking lots or in nearby wooded areas that are able to stop by for assistance.

Brigham used to work with a tent city in Lakewood Township that hosted 120 people. Compared to this, Destiny’s Bridge is quite small; however it has its unique perks. According to Brigham, the camp is the only government supported and approved camp in the northeast.

While the township does not support the group financially, they have provided the land at Block 71, Lot 21, for the homeless to use for the past year.

Back in May 2018, Howell Township officials passed a resolution that would authorize the sale of this land. It was expected to go out to bid by the end of May for $1,355,000. However, since this time, township officials have noted that there will be an auction for the property on June 20.

Over the past month, township manager Brian Geoghegan noted that the township has seen several interested parties.

“The auction has not yet taken place, so there has been no successful bidder and no opportunity for the Township to negotiate a sale agreement. Assuming the property sells at auction, I anticipate discussing a number of topics with the successful bidder, including the homeless encampment and the type of relocation efforts that will occur,” said Geoghegan.

“We have been hoping to find something,” said Brigham about relocation. However, township officials claim that there is nowhere that they can move them.

He remarked that he is very grateful for the cooperation of the township with the homeless community here in Howell in provided the land for their use.

The township has also negotiated a stipulation that goes along with the sale of the property, that the buyer must be responsible for the relocation of the homeless community.

“The township put a clause in the bid contract that ‘the buyer has the responsibility to relocate the homeless’ so we need to see what that looks like before we can make any concrete plans,” said Brigham. While this is the current case, Brigham explained that they are unsure of what that “relocation” really entails.

“Also, Destiny’s Bridge covers all the insurance cost for the encampment, and they need a 30-day notice before cancellation. We are in an awkward position until the buyer gives us the plan of relocation,” he added.

As of now, the encampment is keeping on with their day to day activities, hoping to raise awareness and bring in donations to help support their lifestyle. The impending relocation is “a big mental burden” on the community, said Brigham.

The open house was meant to introduce more people to the camp and what they can offer. Brigham explained that he wants to help those individuals that might “fall through the cracks” or that might not have any family to fall back on when times are hard.

The encampment has proved to be a win/win situation for all involved, said Brigham. The township has no liability as Destiny’s Bridge covers their own insurance, and they are helping the homeless community, all the while “centralizing the need.”

“We’re hoping to showcase that this [housing situation] could work,” elsewhere, he said.

For now, Destiny’s Bridge must wait until bid day to make any officials moves towards relocation.

“We can’t tell what we’re going to do,” said Brigham. 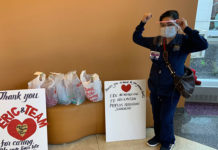