STAFFORD – The Route 72 Manahawkin Bay Bridge that connects Long Beach Island and the mainland has been undergoing construction for some time now.

Many residents wonder, when will this bridge construction be done?

“The federally-funded $350 million Route 72 Manahawkin Bay Bridge project began in 2013 and is expected to be completed in 2021. The three-mile long causeway links Stafford on the mainland with Ship Bottom on Long Beach Island, and it had become structurally deficient and functionally obsolete after nearly 60 years of service,” said Daniel Triana, Public Information Officer for the New Jersey Department of Transportation (NJDOT).

Triana noted that the term “structurally deficient” does not necessarily mean that bridge is unsafe, but rather points to the fact that the deck, superstructure or substructure of the bridge needs repair.

The proposed project will be a pair of twin bridges when completed, as opposed to the single two-way bridge.

“The twin bridge configuration does not increase capacity, as Route 72 will continue to have two lanes in each direction. However, the addition of shoulders will provide more efficiency by providing room for breakdowns and for emergency vehicles to pass unobstructed by traffic,” explained Triana. “The shoulders increase operational redundancy, safety, and improve the means of egress in the event an evacuation from the island is ever needed in the future.”

Triana also noted that the changes to the Marsha Boulevard intersection will include the addition of a third lane in each direction on Route 72. This will “increase the number of cars that get through the traffic signal, which will help ease congestion,” he said.

The project is being carried out by five separate construction contracts.

“Schiavone Construction Co. is the contractor for contracts 2 and 3, which include the new Bay Bridge, and the rehabilitation of the East and West Thorofare Bridges. George Harms Construction Co. Inc. is responsible for contract 4 which includes the rehabilitated existing Bay Bridge, Hilliards Thorofare Bridge, and new bulkheads. C. Abbonizio Contractors, Inc. is responsible for contract 5, which includes environmental mitigation and public access improvements on Cedar Bonnet Island,” said Triana.

Contract 1 includes operational and safety improvements in Stafford Township around the Marsha Boulevard intersection, and improvements in Ship Bottom. This contract is not expected to go out to bid until 2019, however.

“The project includes wetland creation, mitigation for freshwater wetlands, and retrofit of two existing stormwater basins within the Barnegat Bay watershed and public access improvements,” it stated on the NJDOT website.

The state environmental assessment associated with the entire project produced a Finding of No Significant Impact. In a statement dated September of 2011, Ernie Blais of the Federal Highway Administration noted that “the Federal Highway Administration (FHWA) has determined, in accordance with 23 CFR 771.121, that the proposed project will have no significant impact on the environment.”

“This design is consistent with the objective to build in strength or redundancy to better withstand future storms,” he said. “The existing causeway sustained relatively minor damage during Superstorm Sandy, but storm damage is a concern especially because Route 72 provides the only way for motor vehicles to enter or exit Long Beach Island.”

Amid all of these improvements, NJDOT will also be making public access to the waterfront easier, especially in areas where people can go to crab or fish. And if you love the light fixtures that illuminate the bridge across the bay at night, fear not; the “String of Pearls” lighting will be replicated on the outside of both bridges.

Sidewalks also will be provided along 8th Street and 9th Street, Barnegat Avenue, Central Avenue and Long Beach Boulevard in Ship Bottom as part of the pedestrian safety improvements and connectivity for the Island during the final phase of the project.

“The majority of the work has been on schedule and there have been no major obstacles during construction,” said Triana. “NJDOT has been working closely with local officials to ensure the impact to the community is minimized as best as possible.” 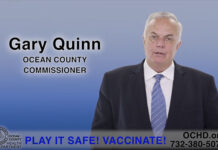 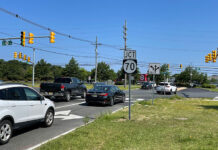