BRICK – Developers of the Wawa at the intersection of Duquesne Boulevard and Route 70 appeared before the Township Board of Adjustment on June 13 to present a revised plan for a side entrance. The entire plan was rejected by the board in March 2017, mostly because nearby Lake Riviera residents complained about the proposed entrance/exit near the intersection of Duquesne Blvd. and North Lake Shore Drive, which is already congested.

The project was finally approved in December 2017 after Brick 70 Developers LLC eliminated the side entrance/exit, with the only remaining access to the site located on Route 70.

The applicant’s attorney John Jackson said this new application has a change in configuration, which includes moving the side entrance further up North Lake Shore Drive, away from Duquesne Blvd.

The new design would allow motorists who are driving westbound on Route 70 to enter the site from the side without having to make a U-turn by Costco.

The proposal would also permit left turns into the site off of Duquesne Blvd. and North Lake Shore Drive, and would allow motorists make a right-turn-only exit using the same driveway. Left turns leaving the site towards Route 70 would be prohibited.

Traffic engineer Nick Verderese said that the new design “addresses a lot of concerns” such as reducing overall queuing and traffic at the Route 70 intersection.

The traffic engineer noted that cars could travel all the way to Costco using cross access roads that link the shopping centers together without having to use Route 70.

“It’s almost like a service road through the properties,” Verderese said.

Board member Mike Jamnick said he was concerned about cars making a right turn out of the site into the Lake Riviera neighborhood.

“People will be getting lost in the neighborhood and making U-turns where there are children playing,” he said. “It’s not a good idea.”

Board member Glenn Fuchs agreed. “Does this benefit the neighborhood or the business?” he asked. “I see a lot of safety issues there.”

Michelle Strassheim was the only board member who agreed that the new driveway could benefit the traffic flow. She said this was her observation after she grew up on a street where a commercial use was added.

After a brief recess, attorney Jackson said his client had an alternative proposal for a single driveway that would allow an entrance only to cars coming off Route 70 and to locals who wish to use the Wawa or Panera Bread franchise entering off North Lake Shore Drive or Duquesne Blvd.

“It would be ingress only, and more convenient for the neighborhood,” Jackson said. “However traffic gets to the site, it would be in only.”

Verderese said the second proposal is one that the township traffic engineer said he prefers.

About two dozen members of the public attended the meeting, and they will get their chance to comment after the professionals conclude their testimony.

A third Board of Adjustment hearing on the matter has been scheduled for Wednesday, September 7 at 7 p.m. at Town Hall. 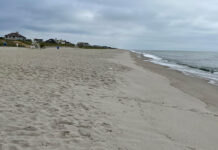 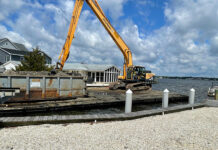