First in line is Cedar Bridge Manor Park. In January 2020, the township administration met with the residents who live near the waterfront park to get their input for the park design, and their suggestions are being incorporated into the final plan, said Mayor John G. Ducey.

According to township Business Administrator Joanne Bergin, the overall consensus from the meeting was the residents want to remove proposed bocce courts and a horse shoe pit in favor of an expanded playground area – specifically, the desire to accommodate swings.

Residents also suggested relocating the playground area further away from the shoreline, she added. They also asked for a bike rack.

“There is not enough space for two playground areas, and the residents were happy to upgrade the equipment and add swings,” Bergin wrote in an email. “This is a very similar approach to the project the township did not too long ago at Bay Harbor Beach.”

Meanwhile, the township’s professionals are working on securing the necessary permits for the project and finalizing the design.

Since the park is a shoreline restoration project, a CAFRA (Coastal Area Facility Review Act) permit is needed, and possibly other DEP (Department of Environmental Protection) permits. State review and approval of these could impact the construction timeline, Bergin said.

“Ideally, our plan was to go out for bids, award a contract, and complete the Cedar Bridge Manor Park Improvement Project in 2020,” she wrote. “However, the state’s review required permits will ultimately determine the timeline, and that is not yet complete.”

Cedar Bridge Manor resident Louis Pennacchio attended the January meeting, along with about a dozen of his neighbors.

“I see people walking their dogs, and sometimes they use the basketball court, but the park isn’t used that much,” said Pennacchio, who lives next to the park.

“I hope they replace the fence, it’s falling down. It’s definitely in disrepair,” he said.

The administration has not started preliminary plans or discussions for the final park renovation for Mallard Point, although Bergin said that the required permits would likely be the same since it is also a waterfront improvement project.

The parks’ renovations would be funded by way of the township’s capital budget, said Mayor Ducey, and the administration would seek grants that become available as construction nears.

“Green Acres is one we have been successful with in the past,” he said.

The state usually announces funding rounds in October and March.

Additional non-park improvements over the past few years include the Forge Pond tennis courts, which were rebuilt; a new pavilion building at Brick Beach 1; and upgrades to the shower platform, walkway and parking lot at Brick Beach 3.

Two other parks, Arrowhead and Frede, were completed before the current administration. 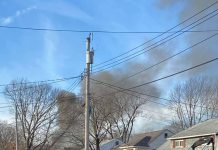