BRICK – The Board of Education approved a redistricting plan that would relieve overcrowding at Veterans Memorial Elementary School by sending 64 of their students to Herbertsville and Midstreams elementary schools for the 2017-2018 school year.

The district’s Director of Planning, Research and Evaluation, Dennis Filippone, outlined the plan during the May 11 Board of Education meeting.

He said the redistricting plan would not only relieve overcrowding at Vets, but it would also provide for more equalized class sizing across the elementary division.

“This was really a matter of geography,” he said. “Although we know we have declining enrollment in the district, the Veterans sending area was not declining. As a matter of fact, there was some growth in that area, so we had to address that.”

Filippone said a committee of administrators and Board of Education members met four times to discuss the redistricting plan after they received a demographer’s report.

Afterwards, the committee met with the PTA presidents, school principals and all the Board of Education members to discuss what Filippone called a baseline plan. “From that meeting, the PTA presidents all suggested that we meet with the individual PTAs at the three affected buildings, so we held meetings at night, which were all very well-attended by both staff and parents at Veterans, Herbertsville and Midstreams,” he said.

A final meeting was held on April 24 for one last opportunity for the public to come out, see the plan, make their comments and suggestions. The meeting, held at Vets Elementary School, was also very well-attended, Filippone said.

“So next year when they move forward the fourth grade will have two sections, and the average class in the fourth grade will be 12. The thing that we really looked for is averaging the class sizes by section for all three buildings and the plan worked pretty well to do that,” Filippone said.

The committee understands that families develop a bond with their school, Filippone said, especially at the elementary level. Therefore, any current third or fourth grader at Vets, who is affected by the plan, could stay there if their parents make a written request to the superintendent and they are willing to provide transportation for their student.

“That’s not to say that we’re going to say no to anybody,” Filippone said. “If the parent is willing to transport their son or daughter, and they put that request in writing, those requests will be approved.”

Interim Superintendent Thomas Gianalenella said that sometimes change is more difficult for the parent than the student.

“I think it’s important that we take this small step, and believe me, it is a small step, to try to equalize our class size,” he said.

Any new students who would normally have attended Veterans Elementary School have been bussed to other schools this year because “we couldn’t fit them in anymore,” Gialanella said.

“Looking to the future, I don’t know what’s going to happen, but I think this solves the problem for the present,” he said. “Then we’ll see where the growth and the loss is in the future and if we need to do anything else.”

The next Board of Education meeting will be on Thursday, June 1 at Brick Memorial High School at 7 p.m. 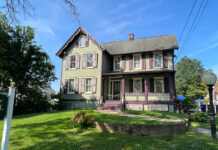