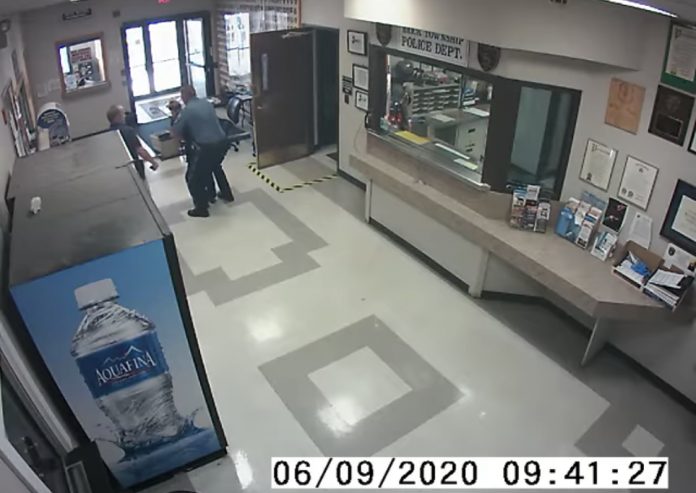 BRICK – A police officer performed the Heimlich maneuver to save an EMT who was choking while at the station.

Police shared the dramatic security footage of the EMT, Katelyn Lammer, who was eating at a table in the station’s lobby. She was there screening people for COVID-19 when they enter the building. When watching the video, it’s clear to see exactly when she realized something was wrong. She went to the police window and banged on the glass.

Sgt. Josh Jenssen told officers near the door to get out and help her. Sgt. Austin Kenny and Sgt. Charlie Kelly were the first out of the door and Sgt. Kelly was able to clear the airway obstruction with abdominal thrusts.

“And this is why we train,” Brick police said. “Great job Sgt. Charlie Kelly, and we’re all glad you’re okay EMT Katelyn Lammer.”

The officers stuck around as she sat down and recovered.

“Our EMTs are the best. They’ve saved numerous lives, helped countless sick and injured people, and they display a level of professionalism and competence throughout this whole COVID crisis that could serve as an example to healthcare workers everywhere,” Brick police said. “Whenever we’ve needed them, they’ve been there for us.”