BRICK – A house party estimated to have more than 400 people grew out of control Monday night, ending in several arrests and two officers being struck by a car leaving the party.

Neighbors contacted police on July 20 at around 9:30 p.m., complaining about noise, littering, public urination, trespassing, and drug use.

The Atlantic Drive homeowner, Michelle Cicchillo, told police the party continued to grow until it was beyond her control. She said she tried to get them to leave but they were defiant and refused.

Police from Brick and several other towns came to the neighborhood to disperse the crowd, and direct traffic out of the Baywood neighborhood and Drum Point Road. The entire process took several hours as officers scoured the neighborhood, finding partygoers and instructing them to leave.

“Other than a few intoxicated and belligerent subjects at the party the majority of the attendees were compliant with police orders to disperse,” police said.

However, a white Mercedes sped off, striking two officers. One, a Street Crimes Unit Detective, was uninjured. The other, Patrolman Joseph Riccio, was transported to Ocean Medical Center in Brick to be treated for a knee injury.

Police pursued the vehicle as it fled west on Drum Point Road and then on to the Garden State Parkway. They didn’t follow it further because it was deemed unsafe.

An hour later, Brielle police spotted it. The driver, Darius Edwards, 24, of Brooklyn, was charged with two counts of Assault by Auto, Eluding, Obstruction and Possession of Marijuana, as well as motor vehicle offenses.

The homeowner, Cicchillo, was charged with Maintaining a Nuisance and violating the township noise ordinances against excessive loudness and mass gatherings.

Additionally, Dakari Smith, 23, of Brooklyn, refused to obey orders to disperse and was arrested for Obstruction.

Chief James Riccio would like to thank the law enforcement agencies that assisted and helped to bring this incident to a successful conclusion.

Unsafe, Inexperienced Boaters On The Water 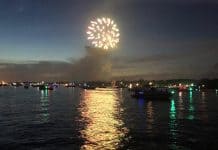