The match was at the culmination of the two-hour event, which was hosted by acting Superintendent Dennis Filippone, and sponsored by the school district and the Ocean County Prosecutor’s Office.

“Frankie Edgar came from training camp to be here, even though he has a fight coming up in about a month,” Filippone said.

An estimated 600 people came to the high school to see Edgar in person, but before the exhibition match was held, a strong anti-opioid message was the theme of guest speakers Brick Mayor John G. Ducey, Police Chief James Riccio, and Ocean County Prosecutor Joe Coronado.

In 2017 the number of deaths dropped finally dropped about 25 percent to 163, which Coronado credited to a three-pronged approach being used by local schools and law enforcement: education, enforcement and rehabilitation.

Filippone, who was a long-term principal at Brick High School, introduced one of his former students, senior Cameron Cohen, who described a thread of addiction that wove through his family and ended with the heartbreaking death of his brother.

An Ocean County mother who lost her 18-year-old son to an opioid overdose was the next speaker. Trish Horner presented “Christopher’s Journal: A Mother’s Love,” which described a roller coaster ride of hope and despair as her son repeatedly overdosed, went to rehab, and went back to using heroin again and again.

The last time she saw her son alive was at 11 p.m. on Sept. 17, 2006 as they said goodnight to each other and he went up to bed. The next morning she went into his room and saw blood dripping from his mouth.

“He was cold. What went wrong? How do you say goodbye to your son who is laying in his bed dead? What will I do with my unfinished love for him?” Horner asked. “He turned our lives upside down.”

Later she learned from the coroner that her son died from an overdose of what he didn’t know was 96 percent fentanyl. “If it had been heroin, he would still be here,” she said.

Filippone came back to the podium to introduce the two “elite athletes” for the exhibition match, Edgar and O’Cone, who is a three-time all American wrestler and a blackbelt in Judo.

The two men thrilled the audience with a series of wrestling moves, flips and pins before they shook hands and Edgar took the stage.

“You’ve got to learn how to say no, everyone wants to be the cool guy and fit in,” he said. “I went to those parties when I was young, but I had goals, I kept my eye on that,” he said.

“There is a lot of temptation, but it’s a cool thing to be a leader and not a follower,” Edgar said.

Brick resident Janet Ritchey, 51, was in the audience with her daughter, Shannon, 20, who attended Brick High School until she dropped out at 14 when she became addicted to heroin.

Ritchey said that her daughter had overdosed eight times; on two of those occasions she had administered Narcan to her daughter, which blocks the effects of opioids.

Shannon, who has earned her GED, has been clean for 11 months and lives in a sober community in Pennsylvania.

“She even visited me in the hospital after my [last] overdose, and got my mom a Narcan kit,” Shannon said.

“It’s a very strong message everyone needs to hear. There are too many families affected by this horrible epidemic,” she said. “But there is hope.” 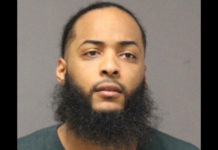