BRICK – Gray skies and steady rain did not put too much of a damper on the return of the Brick Farmer’s Market, held from 9 a.m. until 2 p.m. at Windward Beach Park last Saturday.

In previous years, the market closed at noon, but many residents complained they were unable to get there in time because of their kids’ sporting events, so the hours have been extended.

While more produce would be offered as the summer progresses, 22 of the 32 vendors who signed up came on Saturday, and a steady flow of people who donned their raincoats and umbrellas for opening day.

There were even half a dozen food trucks that were parked and were selling ready-made foods and snacks.

Katie and Bryan McGinn have lived off Burnt Tavern Road in Brick for only about a year, and found out about the Farmer’s Market late in the season last year.

“We love living in Brick, and we are blown away at the choices, options and prices at the Farmer’s Market, and the people are so friendly,” Katie said.

“They have a lot of good stuff, so people are willing to come out in the rain,” added Bryan. The couple had purchased empanadas, quiche, “tons of veggies,” and a variety of plants.

The largest produce stand, Colony Market, has a history in Brick that dates back 80 years when Olinto Marchetti peddled produce door-to-door all along the Jersey Shore.

His son, Aldo Francis, took over, as did his son, Aldo Paul. The family built a storefront on Mantoloking Road in 1938 where it remained until 2008.

Olinto’s great-grandson, Todd, has taken the business on the road, selling produce at multiple farmer’s markets.

“We pull from local farmers and from the Philadelphia Regional Produce Market, which is a regional produce hub,” said Todd. “My family has been members for over a century.”

“We’re giving them out so we could slowly eliminate single-use plastic bags, which end up in the oceans and animals get caught up in them,” Fozman said. The plastic bags also jam the automated equipment at the recycling center, he said.

The township has handed out some 2,500 of the reusable bags in three years, he said.

Breton Woods residents, Michael and Maureen Konopada, said they have been coming to the Farmer’s Market for the past three years.

“We come for the fresh produce, and our kids enjoy the smoothies and the food trucks, but we left the kids at home today, they decided to skip it because of the rain,” Maureen said.

Dogs are not allowed, and while some vendors take credit cards, there is no ATM on the premises. 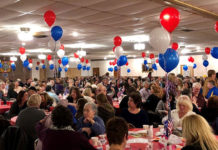 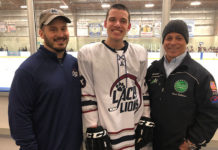