BRICK – A Brick woman and a Lakewood man were arrested by members of the Township Police Department’s Street Crimes Unit for drug related crimes.

Members of the SCU made the arrest around 5:40 p.m. on May 7, following an investigation into suspicious drug activity in the area of a McDonald’s located at 191 Van Zile Road.

Melissa A. Esper, 27, was charged with possession of crack cocaine, possession of paraphernalia and obstruction. She was also issued multiple motor vehicle citations and released on a summons.

Anderson was also issued multiple traffic citations. He later turned himself into authorities and is currently lodged in the Ocean County Jail. 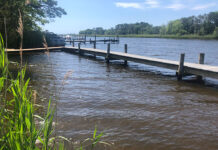 Mallard Point Park To Be Improved