BERKELEY – Local officials want to build a new dog park in town, but are being challenged by the State Department of Environmental Protection.

The dog park is proposed to be located on Butler Boulevard, not far from the Bayview Avenue intersection.

The proposed plans don’t go all the way to the corner, where parents park to drop off or pick up their kids when the school bus comes. It’s a short distance from that intersection.

According to the plan map, the parking lot is closest to Bayview. This part would be gravel. There would be one entrance and one exit to the parking lot. A trash bin and a pet waste bin are planned. There is also a possibility of a water fountain so people could fill their water bottles or dog bowls.

You can’t see the wetlands from the road, but just beyond this property, there is marsh. The map shows a 50 foot buffer between the park and the wetlands.

Councilman James Byrnes said the township did the work on the property and it’s clean and ready to be used.

The DEP shut down the progress on the park, Byrnes said at the end of December, even though the engineer designated the wetland area.

“Every project in town has been held up by the DEP,” he lamented.

The New Jersey Department of Environmental Protection already has a clean-up/investigation site notice on the property. A monitor well is shown on the map of the proposal.

A request to the DEP for more information was not returned as of press time. 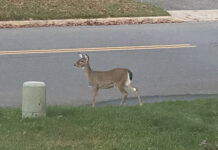