BERKELEY – Township officials told residents of a neighborhood that floods frequently that they are still working out the solution.

“It’s been almost a year since we’ve been coming here,” said Longport resident Donna Amon. She wanted an update.

The biggest trouble spot is the intersection of East Longport and Narragansette avenues. Residents said that sometimes there is more than a foot of water there. A lagoon neighborhood near there gets cut off, and vehicles can’t safely get through.

The difficulty is that the intersection is in Ocean Gate and the residents are mostly in Berkeley. The Berkeley residents literally drive out of their streets, go through Ocean Gate and then back into Berkeley to get to Route 9. Their only way in or out is through the area that floods.

Also, these are county roads that are flooding. So, that means the county has to approve work being done.

There are a lot of strategies in play. One involves repaving roads in Berkeley, higher in the center, so that water diverts off the sides.

“There’s only so much you can do without flooding yards,” the township engineer said. He is also the engineer for Ocean Gate, so there’s synergy there.

Some of these homes are built a little lower, so they might get water in their homes, officials warned.

Another plan the town is looking into is creating an easement that will allow drivers to head through if the main route is flooded. This would be used only when there is flooding. Officials said in May that the attorney was close to finalizing the easement. Condemnation procedures were even on the table at one point.

Residents have said that the water in the streets is not just coming down, but coming up as well. They are concerned that a combination of a rising water table and other environmental factors means that instead of water draining from the road to local bodies of water, the opposite is happening. Some have noted that the water in the streets is sometimes saltwater. What’s even worse is when the water lingers in the winter and freezes over. 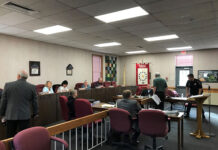