BERKELEY – With a catch in her voice, Councilwoman Judith Noonan announced during a recent Township Council meeting that she will be resigning in August.

She thanked the workers of every department, praising them for serving the people.

“We make the phone calls but the people in town do all the work,” she said.

“Unfortunately, I am resigning due to many unsatisfying factors which have caused me to become increasingly disappointed with unprincipled political decisions over the past several months,” she wrote in a resignation letter.

“The reason I became a Councilwoman was to serve my constituents and to make the lives of the people of Berkeley Township better. I can no longer be a part of the hiring practices, excessive spending, and the unethical political behavior,” she said. “I was elected to put the interests of the people of this township first but when I have not agreed with this mayor and council on issues, I have faced backlash and personal pain.

“This unprofessional conduct I can no longer tolerate,” she said.

“It has been a privilege to represent my ward and the people of Berkeley Township for nearly a decade. I will miss helping you as your councilwoman, but I will always be there for you,” she said.

Councilman James Byrnes said during the meeting that he appreciated what she did for the town and joked that he was going to have to find someone else to fight with.

The mayor and the rest of the council did not comment on her resignation.

South Seaside Park resident Lee Ann Zoppi said during the meeting that Noonan exemplifies what a council member should be.

“We are truly at a loss that you won’t be on the council,” she said. “You will continue to be a good friend.”

As of press time, there wasn’t an official last day for her resignation. She needs to tie up some loose ends first.

Usually, when an elected official steps down, that person’s political party screens candidates and then appoints a new member. That new member would then run for election in November. If they win, they would fill out the remainder of that person’s term. Noonan, like the rest of the governing body, is a Republican.

Noonan will remain active in the community as part of a new Senior Alliance of New Jersey which will be a voice for seniors throughout the state. 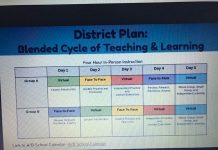