BEACHWOOD – The borough police department welcomed back two men who had served the department earlier in their careers: Thomas Prince and Matthew Tapp.

Both had been Special Law Enforcement Officers years ago and are now Patrol Officers. They were remembered for their dedication and professionalism, and their return says something positive about serving in the borough.

Prince began his law enforcement career as a SLEO (Special Law Enforcement Officer) I & II with the Seaside Heights Police in 2009. He joined Beachwood as a SLEO II in 2012. While here, he showed passion, reliability, work ethic, and professionalism, officials said.

In 2016, he worked for the State Department of Corrections where he successfully completed a State Corrections Officer Training Course.

He is being trained at the Gloucester County Police Academy which is tentatively scheduled to end in late November. When he completes this training, he will rejoin Beachwood Police.

Tapp began his law enforcement career as a SLEO I & II with the Point Pleasant Beach Police in 2013. He became an SLEO II in Beachwood in 2017. One of the many tasks he was given was code enforcement duties while the borough considered the replacement of the code enforcement officer. Supervisors said he had a strong work ethic and a positive attitude.

He then worked for the Ocean County Sheriff’s Department in 2019 before coming back to Beachwood. His father, Robert, retired as chief in Beachwood recently. His brother, Michael, is currently a borough officer. 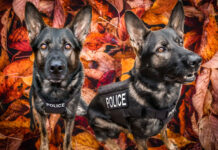