BERKELEY – After residents started complaining about discolored water, Aqua New Jersey has responded, and the township is double checking their work.

The residents have said that the water has a bad smell to it, and looks discolored. It would also taint toilets if left undisturbed for too long. Tests came back of iron and aluminum in the water, which the water company has stated are aesthetic issues in these quantities.

According to a letter being sent out from Joseph Mingle, Aqua New Jersey’s director of operations, three new iron removal facilities will be added, with a completion date being in 2019. These systems will also help remove aluminum.

Other changes to the system might also be coming, Mingle wrote. These would include automated flushing devices to keep water from getting stagnant. Until those are installed, the company is flushing areas that are prone to build-up, like system dead-ends, on a weekly basis.

The company also put out a frequently asked questions list. The answers explain that the chlorine smell is from the chlorine that is used to clean the water, and the New Jersey Department of Environmental Protection requires a minimum level. Some people are more sensitive to the smell than others, and residents are urged to contact the company if they have issues.

In previous public meetings, it was intimated that Aqua did not do any other testing before the water came to people’s houses. The paperwork from the company states that there are “rigorous” treatments, including volatile organic compound removal, iron sequestration, pH control, and chlorine addition. It was explained that iron sequestration prevents color or cloudiness but doesn’t actually remove the iron. That will be done with the new system.

One resident had his water tested, finding radionuclides. Aqua said that the water is in compliance with state and federal standards for radionuclides, a naturally occurring radioactive substance. The water is analyzed for radionuclides at least every three years, the last one being January of 2017.

The application for the new system was just filed, township officials said. Mayor Carmen Amato said that although it has to go through the state, the town will expedite the application on the local level.

Amato said the township has contracted with an environmental company, Najarian Associates, in reference to this situation. This company will review Aqua’s equipment and corrective action plans, and supervise water testing at the source. Then, they will seek residents to volunteer for water testing at their homes, to see what the difference is after it has gone through the pipes.

He added that most of the pipes are not metallic.

Several residents spoke about their water at the most recent Township Council meeting.

Sonata Bay resident Charles Anton said that when the water filters change (on a private filter cleaning Aqua water) it’s like cleaning gum out of them.

Another resident, Frank Sochack, asked “why is Aqua allowed to give us a product that isn’t good?”

Jason Kangas, who was one of the first residents who brought up the water issue, and whose water was found to have radionuclides, said his water was recently tested within the state requirements for sequestered iron, but not if that iron had not been sequestered. It also tested as “moderately corrosive.”

One issue, he said, is that there are a lot of summer residents in his neighborhood, so the water gets stagnant in winter months. 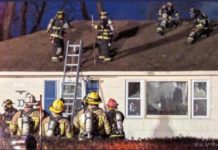 Pine Beach Home Up In Flames